Not what you were looking for? See Funtime Freddy (disambiguation). Or Custom Night?

Yenndo is one of the five animatronics introduced in the Five Nights at Freddy's: Sister Location Custom Night. He is an endoskeleton bear similar to Funtime Freddy's endoskeleton. He can also be seen as an Easter egg in Funtime auditorium on nights 3 or 5.

Yenndo's appearance is identical to Funtime Freddy's endoskeleton, but with few differences - a lack of "face-frames", having both hands (which would include the lack of Bon-Bon), screw without the hat and yellow irises instead of sapphire blue. He can appear in Funtime Auditorium rarely as an Easter egg, and can appear in the Custom Night.

Yenndo will randomly appear in the Private Room office in Custom Night. He will then rapidly drain the player’s oxygen until it's low enough so he can jumpscare them. If he appears in the office, the player must put up the monitor as soon as they see him. If the player fails to pull up the monitor, he will attack. Yenndo also helps Bonnet because of him draining their oxygen causing them to not see anything like Bonnet's nose.

He can also appear in Funtime Auditorium as an easter egg. He does not attack the player when appearing, he also doesn't twitch or move.

In his jumpscare, Yenndo pops up in the player's face, chomping his teeth. 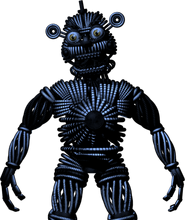 Yenndo in the Office in Custom Night.

The Last Frame Of Yenndo's Jumpscare.

Yenndo in the Private Room, animated. 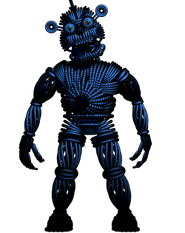 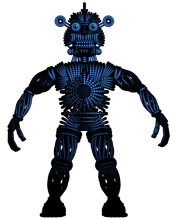 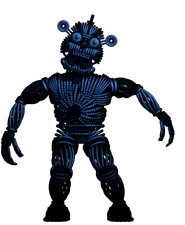 Yenndo's jumpscare with Bonnet behind him
Community content is available under CC-BY-SA unless otherwise noted.
Advertisement