Were you looking for his appearance in FNaF 3?

Springtrap (also known as Spring Bonnie and William Afton) is the main antagonist in Five Nights at Freddy's 3, and returns in the Five Nights at Freddy's: Sister Location Custom Night. He is seen in the 10/20 mode Cutscene and in Circus Baby's second teaser. He is a heavily tattered version of Spring Bonnie suit in which William Afton is trapped inside.

Springtrap's appearance is seemingly almost completely identical to his Five Nights at Freddy's 3 counterpart. In the cutscene, he appears to be more withered, and his organs can not be seen. He seems to be missing his pelvis. In the Circus Baby's Second teaser, his right ear is not severed.

Springtrap is a withered, decayed spring suit, in which William is trapped.

Spring Bonnie was an animatronic functioning with "spring-locks", created alongside Fredbear, and one of the first animatronics created in the Fazbear and Fredbear collective franchise.

Spring Bonnie made his first debut in "Fredbear's Family Diner", the original location which lead to the creation of Freddy Fazbear's Pizza.

He also made an appearance in the Five Nights at Freddy's 4 minigame restaurant, known as "Fredbear and Friends".

He was eventually replaced with "Bonnie", a dark blue counterpart with a slight redesign. Spring Bonnie and Fredbear were decommissioned from an incident called "The Bite of '83", shown in the FNaF 4 minigames.

William met his death in a Spring Bonnie suit, after an attempt to hide in the suit from the dead souls of the murdered children in which lead to William's death due to the springlocks. His soul possessed the suit, his body rotted inside the suit for many years until his appearance in Five Nights at Freddy's 3 as "Springtrap" and eventually in Freddy Fazbear's Pizzeria Simulator as well.

Springtrap appears at the end of the Golden Freddy Mode cutscene. After his son says his speech, Springtrap walks in for a second before the screen goes black.

Spring Bonnie (design is reminiscent of Springtrap) in the Stage 01 minigame.

Springtrap in the Night 5 minigame in FNaF 3 after William went into the Suit.

Spring-Bonnie being used in the FNaF 4 Easter Egg.

Spring Bonnie on stage in FNaF 4.

The Non-Canon version of Springtrap from FNaF World.

The Non-Canon version of Spring Bonnie from FNaF World.

Springtrap emerging at the end of the Golden Freddy cutscene, Brightened for clarity.

Fazbear's Fright after the Fire, Brightened for clarity.

Springtrap emerging at the end of the V. Hard Golden Freddy Cutscene.

Springtrap seen without the background.

The Smoke Clouds that show up in the cutscene to show that its after the Fire.

Springtrap in the image for the Franchise Bundle.

Springtrap from the Extras Menu in FNaF 3.

Springtrap's Jumpscare from the left. (Notice his seemlingly surprised look at the Night Guard).

Springtrap's jumpscare from the right.

The Model of Springtrap from FNaF's 3rd Anniversary with his Freddy Fazbear's Pizzeria Simulator's versions hand in the bottom left.

One of the rare screens at the menu in FNAF 3, showing a dead person within Springtrap. 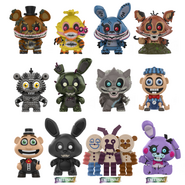 Darktrap among all the other twisted ones mystery minis

A texture of Springtrap staring at the Michael Afton from the office window.

Springtrap's zombie-like walking in Help Wanted.
Add a photo to this gallery
Retrieved from "https://fnaf-sister-location.fandom.com/wiki/Springtrap?oldid=66233"
Community content is available under CC-BY-SA unless otherwise noted.