Were you looking for Breaker Room or  the Control Module ?

Parts/Service is a room in Sister Location, which can be entered through from the Funtime Auditorium on Night 3 & 5.

Parts/Service is a dark room with wires and pipes along the walls. The floor is never seen. There is a conveyor belt that the animatronics sit on while deactivated, with a green button that sends them to the Scooping Room. It's blue and doesn't function on Night 3

The player first visits Parts/Service on Night 3. The HandUnit tells the player that Funtime Freddy is out of power, and that the player has to remove his power module. After removing the power module from Funtime Freddy's chest cavity, they must also deactivate his hand puppet, Bon-Bon who has disappeared from Freddy's right hand. Failing to locate it in the allotted time will result in Bon-Bon's jumpscare.

The player once again visits Parts/Service in Night 5. The HandUnit tells the player that Baby has some problems. Ennard will stand behind Circus Baby's body and uses her voice to tell the player to enter the code to get the key to go to the Scooping Room. Failure to insert the correct numbers or taking too long to type them in will result in Ennard jumpscaring The Player. Once the player types in the correct passcode, the player can get the key and proceeds back into Funtime Auditorium. When the player is done with Baby, they can then be led to the Private Room or the Scooping Room.

The Ambiance that plays on Night 3 in the Parts/Service

The Ambiance that plays on Night 5 in the Parts/Service

The buzzer sound produced when you send an animatronic off. 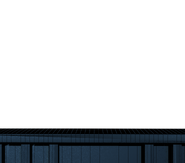 The Parts/Service room without any animatronics in it. 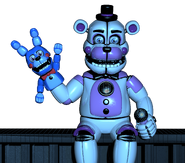 Funtime Freddy waiting to be 'scooped' or fixed. 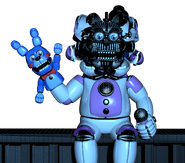 Funtime Freddy after his Faceplates are opened. 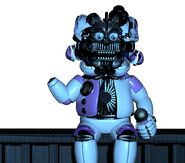 Funtime Freddy, with the Bonnie hand puppet missing from his right arm. 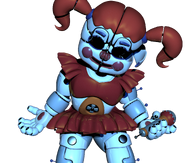 Baby slumped in the same position as Golden Freddy.

One of Baby's faceplates opening up, revealing a keypad.

Bon-Bon on the right side of Funtime Freddy, hiding from the player's flashlight.

Bon-Bon's Jumpscare from Night 3 in the Parts/Service room.

Bon-Bon on the left side of Funtime Freddy, hiding from the player's flashlight.

The Final Frame of Bon-Bon's Jumpscare from Parts/Services. 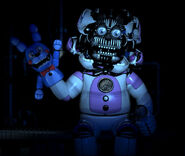 The Blueprint image from the Extras Menu for Parts/Services.

Circus Baby's "Communication Card". Since Ennard is actually talking to the player, this could be Baby's power module.

The green button (off) that sends the animatronics to the Scooping Room. This button is only usable on Night 5 and is blue on Night 3.

The green button (on) that sends the animatronics to the Scooping Room. This button is only usable on Night 5 and is blue on Night 3.

The green button (turning on & off) that sends the animatronics to the Scooping Room. This button is only usable on Night 5 and is blue on Night 3.

The button on Funtime Freddy and Circus Baby

The Parts/Service text from the Breaker Room Panel.
Add a photo to this gallery
Retrieved from "https://fnaf-sister-location.fandom.com/wiki/Parts/Service?oldid=63871"
Community content is available under CC-BY-SA unless otherwise noted.