Were you looking for his Keypad or Preferences?

White with a Black Circle and Tiny White Dot (Keypad Only)

Yellow and Black (Keypad only)

Handyman's Robotics and Unit Repair System Model 5, or just HandUnit for short, is an AI voice guide which acts as a tutorial for the player throughout the game, similar to Phone Guy (excluding Night 4, and the custom night).

HandUnit appears as a yellow tablet on the Elevator with cartoon eyes, a handle on the bottom, a plastic vent on the left, and a label reading "Mike".

[Strange garbling noises](After being sped up by 200% and the pitch increased 25% it decodes to "Argumentative. Standards. Elevation. Passive. Heights.")

(This plays when you click the wrong button on Funtime Freddy)

(This plays when you take too long to turn off Bon-Bon, it also repeats)

(Note: This quote only happens during the fake ending.)

HandUnit's keypad flipping up & down. 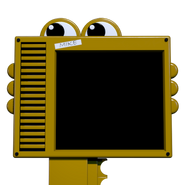 HandUnit before his glitchy keypad turns on. 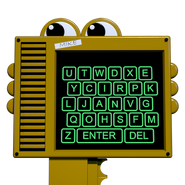 HandUnit's Keypad, showing the keys it has.

HandUnit in the mobile version, Night 2. 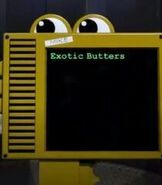 This shows when you type something into HandUnit's keypad.

The error message shown before a preference.

Mike Name in the HandUnit
Add a photo to this gallery

Retrieved from "https://fnaf-sister-location.fandom.com/wiki/HandUnit?oldid=67828"
Community content is available under CC-BY-SA unless otherwise noted.