View source
watch 01:36
We're Getting Mutants in the MCU - The Loop
Do you like this video?
Play Sound

Not what you were looking for? See Funtime Foxy (disambiguation).

Lolbit is an Easter egg, which also appears as an antagonist in Custom Night. It's the Funtime version of Lolbit from FNaF World, the only FNaF game that is not part of the main series.

Lolbit's face splits into five parts, all of which don't seem capable of movement. The first split runs directly down the center of its face with the second running through the center of its eyes, segmenting its face into four different parts in addition to its immobile lower jaw.

Lolbit's ears have an orange center lined at the edges with a white outline. It also has three tufts of fur on its head and has eyes with white pupils and black around it.

There is also an Easter egg in which a Lolbit's mask will replace the Ennard's mask in Primary Control Module.

Lolbit reappears in Ultimate Custom Night as one of the multiple non-selectable characters summoned by Dee Dee. If activated, the same "PLEASE STAND BY" pop-up message will appear, along with the beeping noise. The player must type L-O-L on their keyboard to get rid of it. In the mobile version, the player most tap on the pop up to rid of it. Unlike in Sister Location, Lolbit does not actually take away any control from the player, but Lolbit's beeping noise will attract noise-sensitive animatronics such as Music Man and Lefty.

Lolbit returns in Five Nights at Freddy's VR: Help Wanted in the Blacklight version of Funtime Foxy's level from the Dark Rooms mode. In said level, Lolbit takes over as the main threat from Funtime Foxy. The player must maneuver around numerous copies of Funtime Foxy, Funtime Freddy and Circus Baby, while keeping an eye on Lolbit as they did with Funtime Foxy. Unlike previous installments, Lolbit's full body is actually shown in-game.

Lolbit's Image that shows up on the monitors. 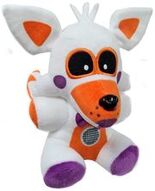 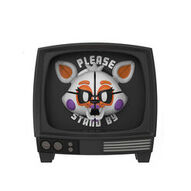