Fredbear Plush is a plushie toy based on the animatronic, Fredbear. He has black eyes with white dots for pupils. He also wears a purple top hat and bowtie. It's gold in colour, similar to the Golden Freddy plush in FNaF 2. A camera remote is laying in between its legs in Sister Location. (Or a Walkie Talkie, as stated by fans)

The plushie doesn't make a major appearance and impact in Five Nights at Freddy's: Sister Location.

He appears in Night 5 in the fake ending, in which he sits on a desk with a camera remote on its lap. He is only there as an object, and does not have a major role in the night. 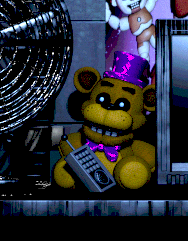