Easter Eggs are randomly occurring or specific things that can happen in the game.

When the player is in the Primary Control Module, clicking on certain objects creates strange sounds. Clicking on the Ennard mask's nose makes a crying noise, and other sounds are produced by the three baby heads and strange toy near Funtime Auditorium when clicked.

When the player is in the Circus Control, clicking on certain objects like the key pad will create strange beeping like sounds, and clicking on the dashboard will make a futuristic beeping noise.

There is an easter egg that can occur in the Elevator and in Circus Control, where BidyBab peeks through the window.

Rarely, when watching The Immortal and The Restless, in Eggs Benedict's Home, a Bidybab will appear watching the player from the bottom right, in the light.

There is a chance that a Minireena will appear spinning in the Primary Control Module on rare occasions. This may happen when you die to Ballora by a set number of times often.

Rarely when watching The Immortal and The Restless, in Eggs Benedict's Home, a Minireena will appear watching the player from the bottom left, in the dark.

Rarely during the Fake Ending, in Eggs Benedict's home, a Minireena can appear popping out of the popcorn bowl after eating some popcorn then immediately going down as seen here.

In the background of the game you can hear a slowed down version Baby saying the numbers "1578" in a random order. It is unknown what this means in the lore currently. This most noticably plays in Circus Control, when offline, additionally Under the Desk.

If you type 1-9-8-3 into the keypad while in the Private Room, it'll reveal 3 images from FNaF 4; The FNaF 4 Bed, Bedroom, and Plushtrap's hallway. This doesn't work during Custom Night's modes with Funtime Lolbit. Also, Scott had clarified that this is the actual date when FNaF 4 takes place.

If you look closely on the Breaker Room map when restarting the power you can notice the FNaF 4 house layout, minigame layout, and Plushtrap's hallway layout.

Randomly when entering an area or booting the game a blueprint of one of the 4 main animatronics will appear on the screen for a minute or two.

When using the beacon in Funtime Auditorium on Night 3, the player has a very rare chance to encounter a bear-like endoskeleton named Yenndo, instead of Funtime Foxy.

The endoskeleton's appearance seems to look identical to Funtime Freddy's actual endoskeleton, though with few differences - A lack of "face-frames", wider eye spacing, having both hands (which would include the lack of Bon-Bon), and most noticeably yellow irises.

Like in every FNaF game you're able to honk a Freddy's nose; in Sister Location you can honk the Fredbear plush's nose (this is only possible in Custom Night).

Bidybab as seen in the Elevator Easter egg.

Bidybab's texture from the Elevator and Circus Gallery easter egg.

The spinning Minireena easter egg as seen in the Primary Control Module. 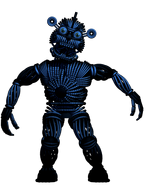 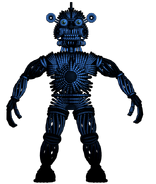 Yenndo in yet another position.

Yenndo being encountered in Funtime Auditorium.

The 1983 easter egg activated in the Private Room.

The FNaF 4 bed and Freddy plush from the on the camera in the 1983 easter egg.

The Plushtrap's hallway from FNaF 4 from the on the camera in the 1983 easter egg.

The FNaF 4 Bedroom from the on the camera in the 1983 easter egg.

The Minireena that rarely shows up in Eggs Benedict's home.

The texture of the Minireena that rarely shows up in the home.

The Minireena that rarely shows up in the home, brightened for clarity.

The popcorn texture Minireena hides in.

The texture of Minireena from the Popcorn Bowl easter egg.

The Minireena Popcorn Easter Egg being encountered by Youtuber RoxasXIIIkeys.

The texture of the popcorn that covers Minireena in the easter egg.

Clear version of the restart panel map. Notice the faded out areas being areas from FNaF 4.

The texture of Bidybab from Eggs Benedict's home, this is similar to Bidybab's texture from the Elevator and Circus Control.

Bidybab hiding on the bottom right of Eggs Benedict's home.