The Custom Night is an extra night in Five Nights at Freddy's: Sister Location. It was released on December 1st, 2016. It can be unlocked only after finishing the game and unlocking all three stars in the menu. It can be reached in the mobile portion by beating the minigame secret ending.

Custom Night takes place in the Private Room, where you face off with Ennard in the Fake Ending, where you must defend yourself from the the original Circus Baby's gang, excluding Circus Baby and Ennard, with some exclusive characters too.

Like the first game, the player must manage their resources, in this case the power and the oxygen. Closing the doors will drain power, as well as Electrobab, while the first variation of Minireena and Yenndo will drain your oxygen, if they are present. There are many different challenges you can complete, similar to Five Nights at Freddy's 2 Custom Night.

Beating each preset game mode on the Very Hard difficulty (except Golden Freddy mode) unlocks a cutscene of Michael Afton walking along a street, with each cutscene showing him slowly decaying and becoming purple. At the end Ennard leaves the decaying body and enters the sewers, while Michael falls down. Moments later, Baby is heard repeating "You won't die," until Michael gets up and Ennard's eyes light up in the sewers.

The jumpscare sound the animatronics make in Custom night (except Bidybab)

The sound produce with clicking an arrow.

The jumpscare sound, every animatronic in the custom night shares this.

The Custom Night logo that's showed on the menu.

The Custom Night menu showing the preset Freddy & Co. on Normal Mode, minus the sidebar.

The Cupcake Challenge on V. Hard Mode, no stars earned. 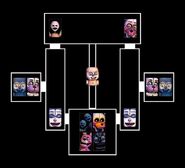 Map and locations of the Animatronics in Custom Night.

Ready button on the menu of Custom Night.

One of the blocks on the menu of Custom Night.

Back button on the menu of Custom Night.

Locked text used for the Golden Freddy preset before the update to unlocked it.

A blank small star on the menu for Custom Night.

Star appears on the menu of Custom Night when you finished a challenge.

The small star for completing Easy-Hard in the presets.

The small star for completing Easy-Hard in the presets (transparent).

Empty big star on the menu of Custom Night.

The big star for completing Very Hard in the presets.

The big star for completing Very Hard in the presets. (transparent)

Retrieved from "https://fnaf-sister-location.fandom.com/wiki/Custom_Night?oldid=63959"
Community content is available under CC-BY-SA unless otherwise noted.