Were you looking for her vampire husband Vlad? Or possibly the show they are from?

Clara is a reoccurring character in FNaF: SL. She is Vlad's wife in The Immortal and The Restless. She is voiced by Amber Lee Connors.

Clara appears in The Immortal and The Restless, a show that plays in Eggs Benedict's Home after every night shift (except for Night 3). She is the distressed wife of Vlad, whom denies ownership of her child. Throughout the series, she attempts to convince Vlad that her baby is in fact his, due to its very vampire-like qualities. Her anger at the stubbornness of Vlad eventually leads her to burning their house down. Once Vlad reveals he gotten Clara's wedding ring from a kids meal, Clara kisses Vlad in appreciation in the final episode. 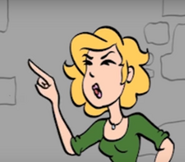 "At least pay your child support, you deadbeat!" 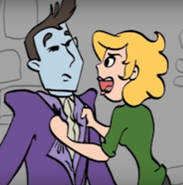 "You need to be part of your son's life!"

"I also set the house on fire!"

Ditto.
Community content is available under CC-BY-SA unless otherwise noted.