Were you looking for the Circus Gallery or the Space under the desk?

Circus Control (referred to by HandUnit as Circus Gallery Control Module) is a location in Five Nights at Freddy's: Sister Location within Circus Baby's Entertainment and Rental.

Circus Control is a small compact room. Against the wall in front of the player stands a large glass window with a toy called "Magician Toy" resembling a monkey and a toy called "Little Joe" resembling BB in front. In the right window, there is Circus Baby and BidyBab's Poster, on top of which reads "CELEBRATE" in large letters. In front of the player is a control panel with four different colored lights buttons mounted on them. Each light seems to be the color of each animatronic's eyes. The purpose for these are unknown. One of the dolls appears to be getting hung. 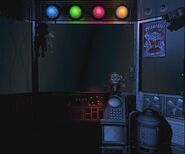 Circus Control in the game's trailer.

Another version of it with the lights off.

The right side of Circus Control as it is seen on IOS and other mobile platforms.

Circus Control's vent as seen Under The Desk.

Circus Control during a controlled shock.

Circus Gallery being lit up as seen from Circus Control.

The desk light on as seen from Circus Control.

The Bidybab Easter egg being encountered in Circus Control.

Circus Baby and her BidyBab's Poster as seen in Circus Control, saying "Celebrate!" referencing the FNaF 1 & 2 "Celebrate!" poster in the office.

The keypad for Circus Control (Blue On).

The keypad for Circus Control (Off).

The controls for looking around.

The controls for going back.

The Circus Control text from the Breaker room Map.

The Circus Gallery text from the Breaker room map.
Add a photo to this gallery