Were you looking for her counterpart Bon-Bon?

Bonnet is one of the five new animatronics introduced in Five Nights at Freddy's: Sister Location Custom Night. She is a recolored pink variant of Bon-Bon.

Bonnet is a recolored variant of Bon-Bon with a pink head and body and green eyes. Bonnet and Bon-Bon have similar looks of "Toy Bonnie" and "Adventure Bonnie". Bonnet has red cheeks and a red bow tie. Bonnet also seems to have a button on her chest, right underneath her bow tie. Bonnet stands at about 1.7 ft tall.

When Bonnet is encountered from inside the office, she walks to the left of the screen and starts to giggle. The player must click on her nose in order to prevent her from jumpscaring them. If her nose isn't clicked for too long and she reaches at the end of the left side, she will jumpscare the player nearly the same way as Bon-Bon will. For an unknown reason at the end of a night with her in it, she will say "Take me with you", making you think she wants to leave Circus Baby's. She has the same jumpscare as Bon-Bon, but just a recolored variant.

Bonnet lowering herself to jumpscare the player, this also happens when you get rid of her. 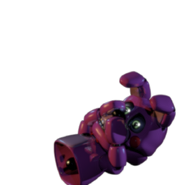 The last frame of Bonnet lowering herself.

The last frame of Bonnet's jumpscare.

Bonnet in the office.

Bonnet in the office with Minireena 2.

Bonnet in the background while Yenndo jumpscares the player. 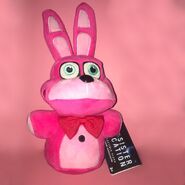