Were you looking for its related Custom Night version? Electrobab? Or their leader Circus Baby

Bidybab is an animatronic that appears in Five Nights at Freddy's: Sister Location. They’re a group of small baby-like animatronics, who act as Circus Baby's minions.

The BidyBabs are small, baby-like animatronics with a pale tan and white colored exterior. They vary in eye color, switching between light purple eyes, orange eyes, and blue-green eyes.

They have a triangular-shaped orange nose, squarish teeth in a similar style of a classic nutcracker, five-fingered hands, (it is unknown whether the fingers can move) smaller ears and a single metal button in the middle of their chest. They are also barefoot. They also have 3 skin colors/shades.

The BidyBabs stand at about 2.5 ft tall or 76 cm tall. This makes them one of the smaller animatronics in Sister Location.

They will only make an appearance on Night 2 when the player hides underneath the desk in the Circus Gallery. They will attempt to open the desk door twice and peer through the holes in it. If the player keeps the door closed they will whisper to each other for a little bit and leave. They can also appear outside the Elevator as an Easter Egg.

One of the BidyBab returns in the Custom Night DLC of Sister Location. BidyBab will always be in the vent ahead of you. When BidyBab gets too close, close the vent door until Bidybab retreats. You can hear BidyBab when you hear little metal sounds means BidyBab is near to the room. BidyBab's jumpscare has also been developed to have better graphics.

"They will lose interest." - Circus Baby referring to the BidyBabs (Night 2) 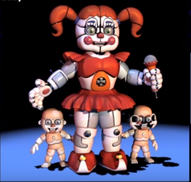 BidyBab's as seen with Circus Baby from the Extra menu.

BidyBab in Circus Baby's Poster as seen in the Elevator, saying "Celebrate!" referencing the FNaF 1 "Celebrate!" poster in the office.

BidyBab in Circus Baby's Poster as seen in Circus Control.

BidyBab in Circus Baby's Poster as seen in the Private Room.

BidyBab in the 1st teaser for custom night with Bon-Bon.

BidyBab's Endoskeleton visible during her jumpscare.

The last frame of BidyBab's Jumpscare in Custom Night.

BidyBab's third and final view in the Private Room vent.

BidyBab's Easter Egg being occurred in the elevator.

BidyBab looking through the holes from under the desk. 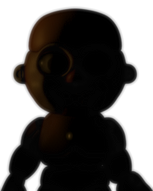 The texture of BidyBab from Eggs Benedict's home, this is similar to Bidybab's texture from the Elevator and Circus Control.

BidyBab hiding on the bottom right of Eggs Benedict's home.

3 BidyBabs along with Circus Baby in an official merchandise poster.

3 BidyBabs along with the other animatronics in an official poster 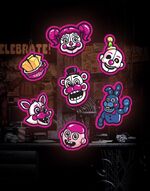 BidyBab on the sticker sheet alongside the other animatronics