Afton Robotics LLC is the name of a robotics company formerly owned by the founder William Afton.

Afton Robotics.LLC is an underground, rundown robotics factory used to create animatronics for Fazbear Entertainment, for example, the Funtime Animatronics.

Not much is known about Afton Robotics, although it's thought to be founded by William Afton to move away from Fazbear Entertainment Inc. (in which the animatronics were created by his working partner, Henry), and to create his own line of animatronics.

But, after the death of his daughter, Elizabeth, at the hands of Circus Baby, it was transformed into a Birthday Party Rental Company, which lead William into selling his company, and the Funtime Animatronics, to an unknown entrepreneur.

Circus Baby is a clown, humanoid animatronic that was made to be the lead singer of Circus Baby's Pizza World. She could sing, dance, and do unique tricks such as making ice cream from her chest and inflating balloons with her fingers. She was also made to catch children. She had a large claw in her chest, that would be used to grab the child, and shove them into her chest when the child was close enough. To get the child close enough, she would make ice cream. This ended up backfiring when William Afton's daughter was killed.

Ballora is a ballerina humanoid animatronic, that was made to get kids to dance, and get in shape. Ballora can sing, and dance. Ballora was also made to help catch children. Ballora has a feature that was made to misdirect people looking for their child. Ballora cannot fit a child inside her but was more used to get the parents off of the trail of the ones who could.

Funtime Freddy is a bulky animatronic bear, made to talk, sing, and move his Bonnie hand puppet, Bon-Bon, around. Funtime Freddy was also created to hunt and catch children. He would count up the children and keep track of parents. He could also lure the children to a place where he could stuff them into his storage tank.

Funtime Foxy is an animatronic fox created to teach children to share. They were also made to kill children, their job was to lure the children with a scent and a parent voice recording to lure the child to it. 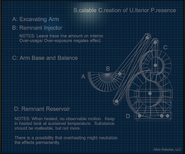